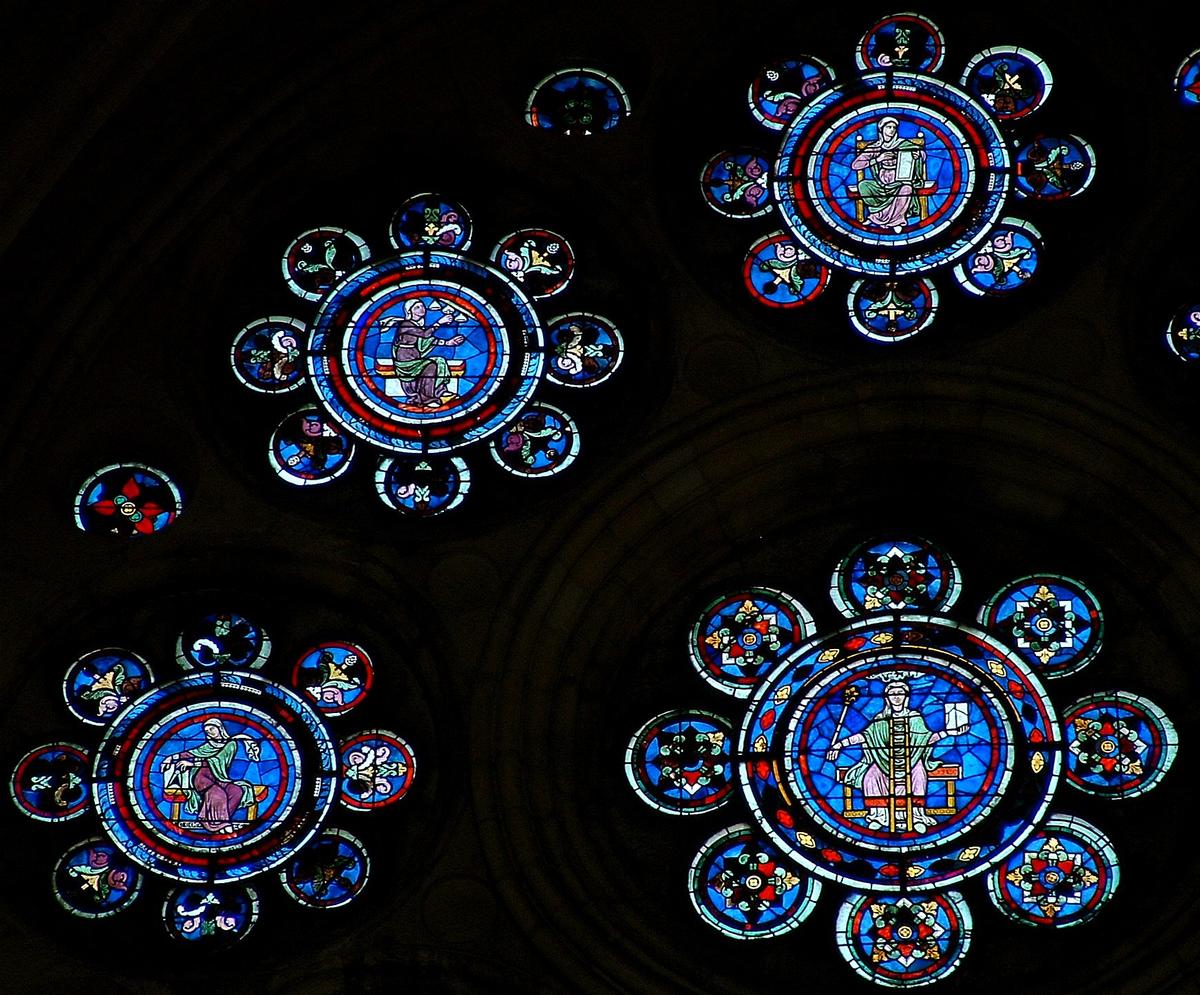 Liberal Arts Education and Philosophy are intimately entangled. In this post we will be reading from a text which describes the image below while also tracing some variations of the image.

Many of you will have seen a version of the above image by now and you may know it as the Hortus Deliciarum (Garden of Delights), but that is not its name. The Hortus Deliciarum is a medieval manuscript compiled by Herrad of Landsberg sometime between 1167 and 1185. Herrad was an abbess who created the Hortus with a community of women; nuns, scribes, scholars, and teachers who intended the illuminated manuscript to be a teaching tool for the women joining their community. The compendium presents ideas drawn from philosophy, theology, literature, music, arts and sciences, including the most significant ideas from Greek, Roman, and Arabic writings.

I myself, the little bee, composed this book titled Garden of Delights, and drew from the sap of the diverse flowers of Holy Scripture and from philosophical works …

I urge you to study this book often and seek the sweet fruit it contains, to refresh your tired spirit by the drops of its honey so that, nourished by its spiritual sweetness, you would be able to confront without danger the transient things of this world

The original manuscript was destroyed in a fire so the image at the top of this article is a page from one version of the Hortus Deliciarum. It is numbered Plate XI bis (Plate 11 again/twice/second) and titled Philosophy and the Liberal Arts. It is brought to us by the Caratzas Brothers who reproduced a version of the Hortus in 1977.

The Hortus produced by the Caratzas Brothers is a reproduction of work done by Canons A. Straub and G. Keller between 1879-1899 and first published in Strasbourg in 1901.

However the work of Straub and Keller builds upon the extraordinary work of Christian Maurice Engelhardt aka Christian Moritz Engelhardt who produced tracings, illustrations, and colourings of the original manuscript which he sent to the printmaker Nicolas Xavier Willemin who printed a version of the Hortus in 1818 by engraving copper plates. A subtle difference exists in the direct translation of the titles of this version. From the German, Philosophie mit den sieben freien Künsten, we get Philosophy with the seven liberal Arts.

And so we finally arrive at that page from the plates first published in 1818 which looks like this in the manuscript.

Now we have traced some of the sources of the images the important thing to remember is that the original author, Herrad of Hohenburg, created the manuscript for pedagogical reasons. Her encyclopedia (enkuklios paideia – complete education/circle of learning) was intended as an aide to teaching. These seven liberal arts made up the formalised curriculum of the Trivium and Quadrivium.

What can be easy to forget when studying the liberal arts is that their shared first principle is education. While the image might give us the Queen of Philosophy at the centre it is often not where the educational journey begins. The image suggests we are to come to terms with the outer Arts before we reach the source of our knowledge. Socrates and Plato, presented to us in a process of teaching and learning, express the process that forms the foundations of philosophy and brings about that love of wisdom. We have come to call that process education.

Below is the translated text of Straub and Keller from page 36 of the Hortus (1977).

PHILOSOPHY AND THE LIBERAL ARTS

In looking at this beautiful composition, one would say that he has before him the working model of a stained-glass artist for a rose window on the facade of one of our old twelfth century cathedrals, like the wheel of fortune at Bale, whose frame bears a striking resemblance to the frame of our subject.

In the center, Philosophy is enthroned as queen, her forehead encircled by a golden crown from which three human heads emerge, designated by the words etica, logica, phisica. Socrates and Plato are seated at her feet and carefully note down her words. On a long scroll, the middle of which is held at her breast, we read: “all wisdom comes from God. Only the wise can do what they will.” Seven streams of living water flow from Philosophy; they are the liberal arts “with the Holy Spirit as their origin.” Representations of them encircle the noble lady under many round arches, separated one from the other by Roman columns, the capitals of which are adorned with foliage or grimacing masks. These arts are ever at her orders in the supreme direction she exerts over the trivium and the quadrivium of profane studies, as expressed by the words inscribed in the circle that frames Philosophy: + arte regens omnia quae sunt ego philosophia subjectas artes in septem divido partes.

At the top we see Grammar, her head covered by a white veil, under which appears the Byzantine coiffure described earlier. She is garbed, as is each of her companions, in a tunic with tight-fitting sleeves and in a bliau or long garment fitted at the waist. The sleeves tight to mid-arm, open into draperies which extend to just below the knees. She is armed with the rod—scope—symbol of the strict discipline that must be maintained over the lowly students; in the other hand she holds a book, whose cover is adorned with precious stones. The following inscription appears in the arch under which she stands: Per me quivis discit, vox, littera, syllaba quid sit.

Moving towards the right of the viewer: Rhetoric, equipped with a stylus and two tablets coated with black wax, to indicate the care that she recommends to the orator in preparing his discourses, each section of which must undergo close scrutiny and may require numerous revisions: causarum vires per me, alme rhetor, requires.

Dialectic, in lively discussion as indicated by the gesture of her right hand. In her left she holds the head of a barking dog, symbol of the unending shouts provoked by disputation and of the vigilance with which the disputant follows the reasoning of the adversary: argumenta sino concurrere more canino.

Music, playing an instrument in the shape of a harp, but which the inscription calls cithara; next to her is a hand organ labelled organistrum and a lira, which today would probably be called rubebe: Musica sum late doctrix artis variate.

Geometry, standing a compass on the ground, circulus, and holding a long surveying rod: terrae mensuras per multas dirigo curas.

Astronomy, her eyes raised towards heaven, as she studies the stars. She holds in one hand a closed box or, according to Rev. Ch. Cahier, a bushel, “because we associate meteorology with her as the directress of agricultural labors: ex astris nomen traho per quae discitur omen.

All these representations are enclosed in a wide circle which bears the following inscription:

Though full of admiration for the philosophers of ancient pagan times, “the scholars of the world and the clerics of former ages,” Herrad is only horrified at poets and magicians, “inspired by the unclean spirit.” She therefore excludes them from this magnificent pictured rose. They are shown at the bottom of the page, deep in their dreams or writing in a book the false pedantries which the spirit of evil, in the form of a black and unsightly winged creature, tries to whisper into their ears. Isti immundis spiritibus inspirati scribunt artem magicam et poetriam, fabulosa commenta. We note the shape of the writing desk or fixed scriptore, which could also be used as a lectern. Both the poets and the philosophers are provided with the primitive horn-shaped inkpot sunk into the desk. Besides a reed or pen, the persons writing hold penknives with black handles.

To these sinister agents of the evil spirit, as Herrad considers them, the Abbess attaches different kinds of idolatry which she develops in a series of very animated scenes, numbering four, if our memory is correct.

Examples of the stained-glass rose windows referenced at the opening of the text can be found at Laon Cathedral in France. Interestingly, here the usual seven liberal arts are joined by medicine.

You can read more about the image including latin translations in these two posts:

Philosophy and the Liberal Arts

And for a translation of the latin in situ see this wonderful piece.

If you haven’t yet seen the images in high resolution it is worth clicking the links to their pages where you can zoom into the images in detail. I’ve listed them below for ease.