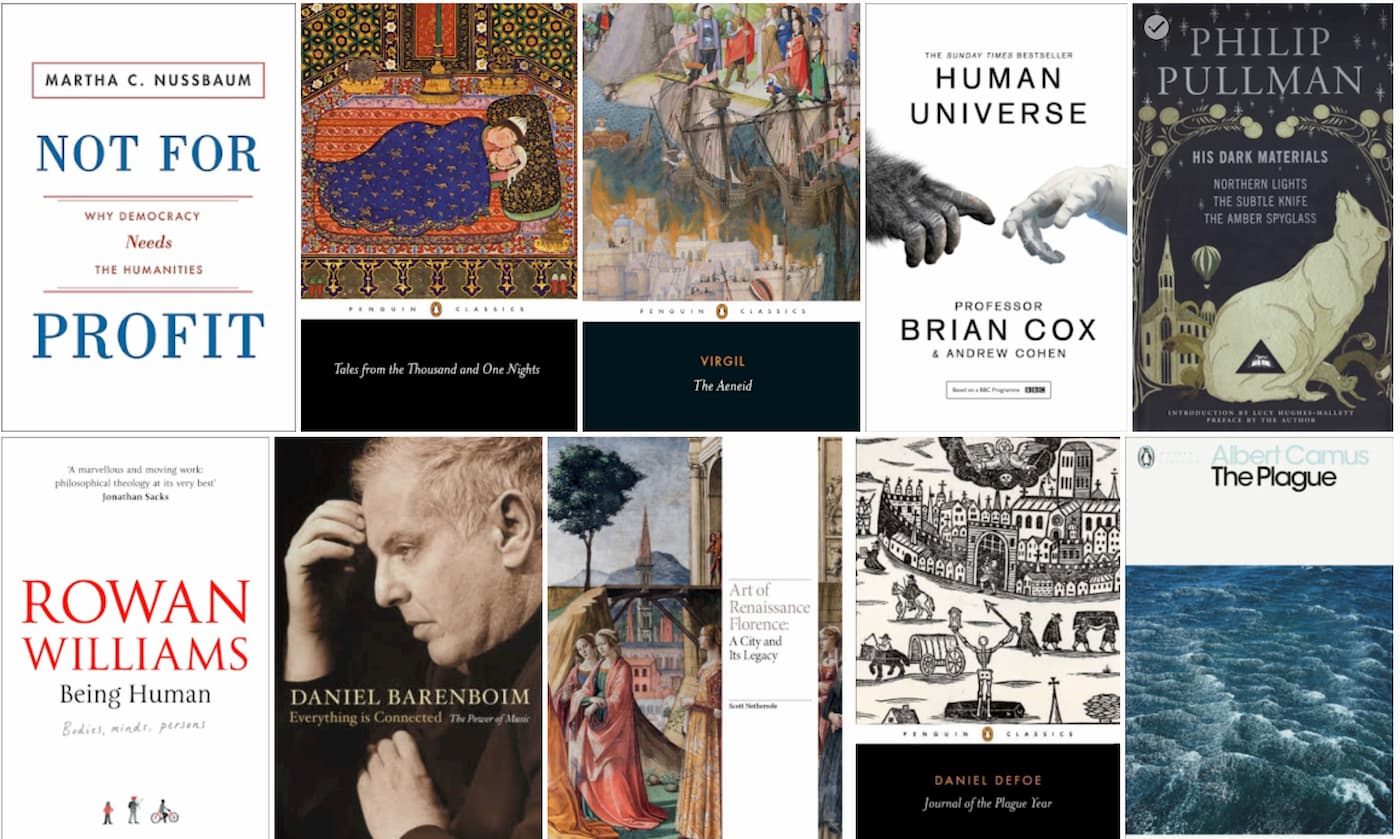 If you are joining our BA (Hons) Liberal Arts programme this year, or still thinking about doing so, then you might want to look over our summer reading list by way of preparation. There are no books that everyone has to have read when we begin. But here are some suggestions for things that will move your mind in appropriate directions with challenging ideas and vivid imaginations. The list gives a taster of different modules on our Programme.

Not For Profit: Why Democracy Needs the Humanities

Which is most important? A society that struggles for freedom and meaning, or a society that lets profit rule everything else? In this short book Martha Nussbaum vigorously defends the idea and the values of liberal arts education. See where your own ideas and values stand in relation to hers.

Tales from the Thousand and One Nights

Imagine you had to tell stories to stave off your execution. And imagine keeping your executioner enthralled by those stories over 1001 nights. These Arabian Nights make for perfect summer reading, enriching our imagination and nourishing a love of what is the same and different in ancient India and Persia, and also Iraq, Syria and Egypt.

One of the great adventures composed by Virgil in Latin between 29-19 BCE. It tells of Aeneas, the Trojan, as he and his fleet seek a new home, it already having been prophesised that he will be the founder of a new and glorious race of people. On the journey we will meet Queen Dido, we will learn of tears at the heart of everything, we will be taken into the underworld, and we will witness the ancestry of Rome and its Empire.

‘Human life is a staggeringly strange thing. On the surface of a ball of rock falling around a nuclear fireball in the blackness of a vacuum, the laws of nature conspired to create a naked ape that can look up at the stars and wonder where it came from. What is a human being? Objectively, nothing of consequence. Particles of dust in an infinite arena, present for an instant in eternity. Clumps of atoms in a universe with more galaxies than people. Yet a human being is necessary for the question itself to exist, and the presence of a question in the universe – any question – is the most wonderful thing. Questions require minds, and minds bring meaning. What is meaning? I don’t know, except that the universe and every pointless speck inside it means something to me. I am astonished by the existence of a single atom and find my civilisation to be an outrageous imprint on reality. I don’t understand it. Nobody does, but it makes me smile.’

Northern Lights introduces Lyra, an orphan, who lives in a parallel universe in which science, theology and magic are entwined. Lyra’s search for a kidnapped friend turns into a quest to understand a mysterious phenomenon called Dust. In The Subtle Knife she is joined on her journey by Will, a boy who possesses a knife that can cut windows between worlds. The Amber Spyglass sees them both questioning Truth in a war with celestial powers that leads to a thrilling conclusion. The epic story Pullman tells is not only a spellbinding adventure featuring armoured polar bears, magical devices, witches and daemons, it is also an audacious and profound re-imagining of Milton’s Paradise Lost.

What is consciousness? Is the mind a machine? What makes us persons? What does it mean to aspire to human maturity? These are among the fundamental questions that Rowan Williams helps us to think about in this deeply engaging exploration of what it means to be human. The book ends with a brief but profound meditation which invites us to consider how ‘our humanity in all its variety, in all its vulnerability, has been taken into the heart of the divine life’.

Everything Is Connected: The Power Of Music

A memoir by the master pianist, conductor and internationalist Daniel Barenboim. The power of music lies in is its ability to speak to all aspects of the human being – the animal, the emotional, the intellectual, and the spiritual. Music teaches us, in short, that everything is connected.

Art of Renaissance Florence: A City and Its Legacy

In this vivid account Scott Nethersole examines the remarkable period of cultural, artistic and intellectual blossoming in Florence from ca.1400 to 1520 – the period traditionally known as the Early and High Renaissance.

A Journal of the Plague Year

In 1665 the plague swept through London, claiming over 97,000 lives. Daniel Defoe was just five at the time of the plague, but he later called on his own memories, as well as his writing experience, to create this vivid chronicle of the epidemic and its victims.

The Plague is Albert Camus’s world-renowned fable of fear and courage. The townspeople of Oran are in the grip of a deadly plague, which condemns its victims to a swift and horrifying death. Fear, isolation and claustrophobia follow as they are forced into quarantine. Each person responds in their own way to the lethal disease: some resign themselves to fate, some seek blame, and a few, like Dr Rieux, resist the terror.

What is a University

‘In his lecture “What Is A University?” given at Wuhan University in 2006, Rowan Williams traced the roots of the university system in the desire to nourish spiritual and moral maturity, as well as intellectual skill. This, he said, provided a model for universities to continue their contribution to the ongoing debates on the moral dimensions of public life both in China and in the West. He said that universities needed to avoid becoming prisoners of tradition, and should resist undue external pressure to produce rapid or commercial results from academic research. They also need to move beyond cultural or political expectations if they are to fulfil their potential. The best product of a university should not simply be technically qualified experts, but citizens of maturity and benevolence.’

Choose Your Own Birth

Every human is both an animal with a deep evolutionary history and an individual who must bring their existence into being.

Beyond True and False

Buddhist philosophy is full of contradictions. Now modern logic is learning why that might be a good thing.

Liberal Arts (latin liberalis, free, and ars, art or principled practice) is not an ordinary university subject. It can make the claim to be the oldest curriculum of higher education in Western history. So with such a rich and diverse history why is it important to rethink that history in modern ways?

Ode: Intimations of Immortality from Recollections of Early Childhood

By William Wordsworth
The child is father of the man;
And I could wish my days to be
Bound each to each by natural piety.
(Wordsworth, “My Heart Leaps Up”)

“We have been living in a bubble, a bubble of false comfort and denial. In the rich nations, we have begun to believe we have transcended the material world. The wealth we’ve accumulated – often at the expense of others – has shielded us from reality. Living behind screens, passing between capsules – our houses, cars, offices and shopping malls – we persuaded ourselves that contingency had retreated, that we had reached the point all civilisations seek: insulation from natural hazards.”

Camus, that great ‘moralist of the absurd’ (Merton, 1967: 718), was drawn to exploring the source of that deep anguish and vulnerability at the heart of human existence; our mortality.  The enlightened subject of modernity rides the wave of reason’s unchallengeable assertion that it is its own ground and principle of existence. Yet no matter how advanced its rational, scientific and technological prowess it cannot avoid the possibility of a sudden death by bacillus or otherwise that would threaten such prowess. Camus was concerned to show that the absurd presence of death in life does not have to lead to illusion, meaninglessness or despair.

The Coronation by Charles Eisenstein

In this wide ranging essay Charles Eisenstein offers a thoughtful, provocative, and often polemical response to Covid19. Part of the challenge in reading such engaging prose is to consider the text critically. That is, in what ways are you convinced or not by the text, in what ways do you disagree while still sustaining your engagement with the work, or are their moments where you want to dismiss it entirely? Or perhaps you find yourself in complete agreement? And what then? The urgency of contemporary writing often throws us into this conundrum more obviously than writing from a time which isn’t our own. But what is happening in this piece is not dissimilar to the questions asked by Socrates who said ‘to fear death, gentleman, is no other than to think oneself wise when one is not, to think one knows what one does not know’. Socrates told us that asking difficult questions is part of what makes life worth living, in fact he went further and said that ‘the unexamined life is not worth living’ and was sentenced to death for his belief in the importance of difficult questions. At the centre of Socrates’ concerns, as is true of the essay, is the difficult (and longstanding) question: how should we live?

Thanks to Dr Tony Biondi for including this piece. You can also read more about Socrates’ questions here