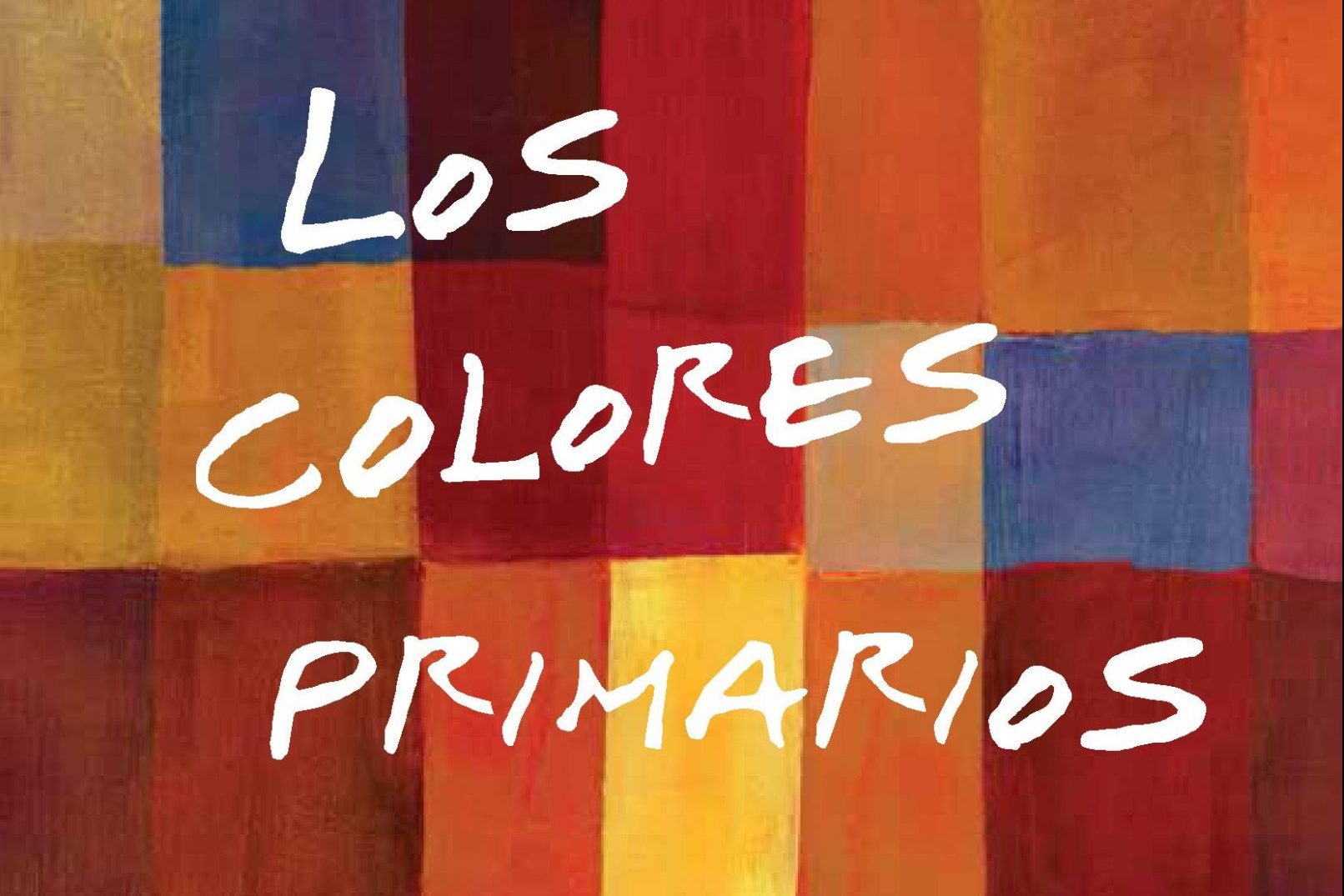 Alexander Theroux’s The Primary Colours is an exhilarating journey with the colours blue, yellow and red through the worlds of art, literature, science, religion, history, nature, music, food and popular culture. One fact bleeds into another creating a beautiful, unpredictable and intense kaleidoscope of images and ideas. The following selections give you a taste of the ‘richly coloured’ fabric of each chapter.

Yellow is a colour, for all its dramatic unalterability, with a thousand meanings. It is, surprisingly, at least to me, a child’s first colour preference. Wallace Stevens called yellow the “first colour,” with an attendant suggestion of decay and dissolution (“the grass is yellow and thin”), but more often uses it affirmatively, linked with the sun: “The sun is clownish yellow.” It is the colour of cowardice, third prize, the caution flag on auto speedways, adipose tissue, scones and honey, the nimbus of saints, school buses, urine, New Mexico license plates, illness, the cheeks of penguins, the sixth dogs livery in grey- hound racing, highway signs, Pennzoil, and the oddly lit hair before adulthood of all Australian aborigines. Easter is yellow. So is spring, and much of the beauty of autumn. It is redolent of old horn, dead coins, southernwood, and the generous sun. It is the colour of butter, arsenic, sponges, candlelight, starving lawns, translucent amber, and cathode transmission-emitters in electrical chassis wiring. It represents wisdom, illumination, intuition, power and glory, the hue of confessors, divinity, magnanimity, ripening grain, eternity, and the gates of heaven. In Egypt it is the colour of happiness and prosperity. (70)

There are many yellow pigments. Yellow ochre in oil paintings is essential. It is permanent with the advantage of not affecting any other colour with which it may be mixed. It is also a yellow that is quite safe for any highlights, whereas lemon yellow and chrome are often too pungent and too powerful. Chrome yellows, introduced in 1797, which tend to turn dark or greenish, are perfectly replaced by cadmiums. Chrome yellow, used by Matisse, by the way, in his Portrait of Andre Derain, covers and dries well but tends to change tone with time. Cobalt yellow (aureolin) is rarely used in opaque or body-colour painting because its mass tone is a dull and undistinguished mustard hue that can easily be duplicated by less expensive pigments, but it is invaluable for transparent glazes and for the precise matching of delicate or very pale colours and off-whites. Cobalt yellow dries extremely fast. As to the instability of colours, yellowing in particular, egg tempera paintings, paradoxically, do not yellow, when it might seem logically they would—yolk becomes clearer as it dries and never darkens—but linseed oil will always darken to yellow. (149-151)

Vincent van Gogh’s pictures dripped with golden light. Consider the rich and buttery yellow ochres of his Starry Night And Portrait of Armand Roulin (1888). What about The Sunflowers? And Yellow Wheat (1889). (“Moving fields of amber grain,” in Don McLean’s song “Vincent.”) The yellows of his famous sunflowers are chrome—he almost always used three tones of chrome yellow—and were once undoubtedly much cruder and brighter than their now subdued and harmonious gold. There are certain critics who ascribe the penchant for yellow of van Gogh, an incipient xanthopsiac, as the possible result of his having been poisoned by digitalis, which at the time was given as a treatment for epilepsy. Vincent wrote to his brother Theo from Aries in 1890: “All the colours that the Impressionists have brought into fashion are unstable. So there is all the more reason to use them boldly . . . time will tone them down only too well.” And he was right. The billiard table in his well-known Night Cafe was once a bright green, as he refers to it in one of his letters. It is now tan, with no trace of green whatsoever. Contemporary artist Robert Moskowitz has recently done a series of engaging pictures entitled Vincent (1989), where he explores, in various tints and symbols, the varying shades of van Gogh’s famous yellows. (152-155)

Blue is a mysterious colour, hue of illness and nobility, the rarest colour in nature. It is the colour of ambiguous depth, of the heavens and of the abyss at once; blue is the colour of the shadow side, the tint of the marvellous and the inexplicable, of desire, of knowledge, of the blue movie, of blue talk, of raw meat and rare steak, of melancholy and the unexpected (once in a blue moon, out of the blue). It is the colour of anode plates, royalty at Rome, smoke, distant hills, postmarks, Georgian silver, thin milk, and hardened steel; of veins seen through skin and notices of dismissal in the American railroad business. Brimstone burns blue, and a blue candle flame is said to indicate the presence of ghosts. The blue-black sky of Vincent van Gogh’s 1890 Crows Flying over a Cornfield seems to express the painters doom. But, according to Grace Mirabella, editor of Mirabella, a blue cover used on a magazine always guarantees increased sales at the newsstand. “It is America’s favourite colour,” she says.

Paradoxically, it is the only one of all the colours which can be legitimately seen as a close neighbour to, as well as essentially symbolic of, dark and light both, oddly black in the night and almost white at the horizon by day. (“. . . deep blue air that shows,” observes Philip Larkin, “Nothing, and nowhere, and is endless . . .”) It can darken, it can obscure, it may float to and fro like a mist, evoking serenity and power. Mirroring each other, the sea takes its colour from the sky. The word sings. You pout pronouncing it, form a kiss, moue slightly, blowing gracefully from the lips as if before candles on a birthday cake. (Is that why Rimbaud insists the colour of the vowel o is blue?) (1-3)

Red is the boldest of all colours. It stands for charity and martyrdom, hell, love, youth, fervor, boasting, sin, and atonement. It is the most popular colour, particularly with women. It is the first colour of the newly born and the last seen on the deathbed. It is the colour for sulfur in alchemy, strength in the Kabbalah, and the Hebrew colour of God. Mohammed swore oaths by the “redness of the sky at sunset.” It symbolizes day to the American Indian, East to the Chippewa, the direction West in Tibet, and Mars ruling Aries and Scorpio in the early zodiac. It is the colour of Christmas, blood, Irish setters, meat, exit signs, Saint John, Tabasco sauce, rubies, old theater seats and carpets, road flares, zeal, London buses, hot anvils (red in metals is represented by iron, the metal of war), strawberry blondes, fezes, the apocalyptic dragon, cheap whiskey, Virginia creepers, valentines, boxing gloves, the horses of Zechariah, a glowing fire, spots on the planet Jupiter, paprika, bridal torches, a child’s rubber ball, chorizo, birthmarks, and the cardinals of the Roman Catholic Church. It is, nevertheless, for all its vividness, a colour of great ambivalence. Love is red. So is death, its counterpart. (159-160)