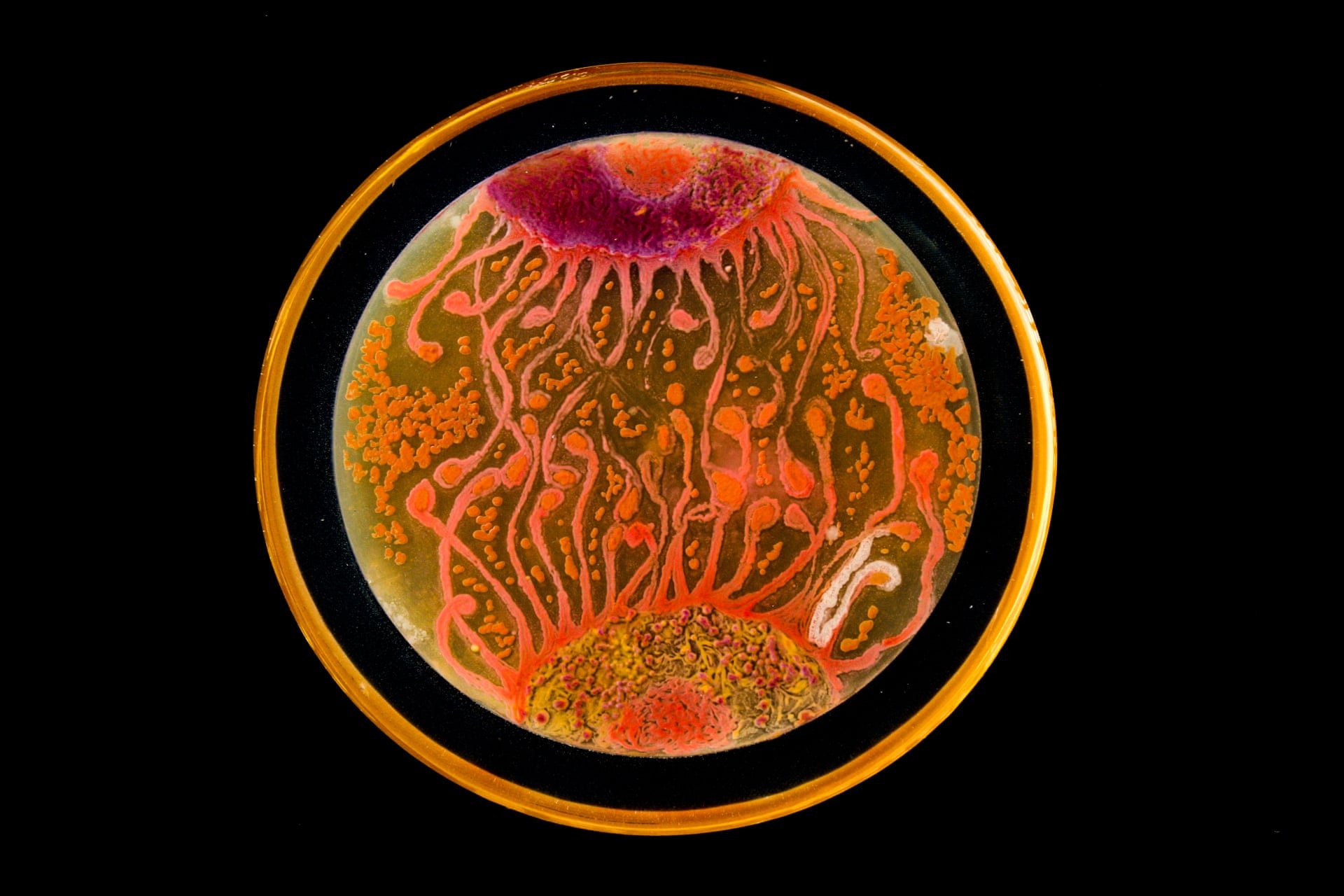 Lynn Margulis (1938-2011) was an American biologist and writer who is mostly known for developing the theory of “endosymbiosis” in the 1970s, which had a great impact on our understanding of evolution, and co-founding with James Lovelock the “Gaia” theory, which approaches and studies life on the planet Earth as a self-producing and self-regulating system.

She was a different kind of scientist, one who does not come along very often. Her great gift was making connections, connections that others just couldn’t make.

Steve Goodwin, dean of the College of Natural Sciences at UMass Amherst

Margulis’s ‘endosymbiosis’ literally means living (bios) together (syn-) within (endo-) and refers to the way early life evolved about 2 billion years ago from the formation of the first cells to larger and more complex organisms such as plants, fungi and animals. According to this theory, evolution was not propelled by random mutations in natural selection in the classic Darwinian manner of linear descent but through chance encounters and merging of tiny organisms such as bacteria who discovered that living together in close intimacy was mutually beneficial.

The following passages are from What is Life? (1995), which Margulis co-authored with her son Dorion Sagan. Bacteria are the heroes of this book and the most worthy pioneers in the history of evolution both for their tremendous metabolic and engineering capacity and for their role in sustaining life on the planet.

4 | MASTERS OF THE BIOSPHERE

Had [bacteria] been discovered on Mars, their description would have been much more dramatic and the bizarre quality of their natural history, which often seems like science fiction, would not have been missed.
SORIN SONEA AND MAURICE PANISSET

Perhaps some of my readers will respond with a smile to my doctrine of living contagions.
AGOSTINO BASSI


FEAR OF A BACTERIAL PLANET

Microorganisms were a curiosity a kind of natural history sideshow, before it was realized that some cause disease. Antoni van Leeuwen-hoek, inventor of an early version of the microscope in the 1670s, described these beings as “animalcules”—tiny animals. He was struck by their rapid movement, odd shapes, and sheer quantity. In 1831 half-blind Italian law student Agostino Bassi (1773-1856) proved the existence of infection by spreading muscardine (silkworm dis-ease) from one fungus-infected worm to another. Nonetheless, a generation after Bassi showed that disease did not arise spontaneously, even Pasteur thought of bacteria only as agents of decay.

A turning point occurred when Robert Koch (1843-1910) found bacteria in blood of cows stricken by anthrax. These little rods (“bacilli”) grew from hardy bacterial spores. Feeding them blood serum, Koch, a German medical officer, learned to grow the bacteria in a liquid broth. He developed a stain for them, photographing the culprits by mounting a camera on a microscope. Yet the now common notion that bacteria caused infectious disease was slow to be accepted. English nurse and philanthropist Florence Nightingale(1820-1910) denied the existence of germs to her death.

When the germ theory of contagion finally caught on, it did so with a vengeance. Different types of bacteria were implicated in anthrax, gonorrhea, typhoid, and leprosy. Microbes, once amusing little anomalies, became demonized. Pasteur, like Howard Hughes after him, had a phobia about dirt and germs. He avoided handshakes.Wiping down his crockery, he meticulously sought evidence of wood, wool, and other detritus in his food. No longer an amusing scandal for parlor conversation, microbes became a virulent “other” to be destroyed. The metaphor of tenacious, infectious bacteria was used in Nazi rhetoric of genocide. Today the low regard for bacteria as Lilliputian “agents of disease” still obscures their enormous importance to the well-being of all the rest of life.

Although micro-organisms are the stuff of life and the motor of evolution, they have been given bad press. Most cultures and religions have their own regimes and rituals of purification and cleanness. In the West the prevailing attitude towards tiny forms of life has been to view them as threatening pathogens. During the Third Reich this pervasive phobia was used as a powerful metaphor in the service of the racial genocide of Jewish, Roma and other populations across Europe. Bacteria, of course, can infect and kill but for the most part are our symbionts and essential to the preservation of our life and health.

One legitimate answer to the question “What is life?” is “bacteria.” Any organism, if not itself a live bacterium, is then a descendant-one way or another-of a bacterium or, more likely, mergers of several kinds of bacteria. Bacteria initially populated the planet and have never relinquished their hold.

Bacteria may be Earth’s tiniest life forms, but they took giant steps in evolution. Bacteria even invented multicellularity. Most bacteria in nature, in spite of popular belief, are multicellular. In these multicellular bacterial beings, each unit cell itself is a bacterial cell.

Margulis and Sagan’s answer to the perennial question “what is life?” is that life is mainly a microbial and bacterial phenomenon. We descend from bacteria and every cell in our bodies is the result of symbiotic arrangements between these ancient tiny organelles that used to live independently before assembling together to create new forms of life.

Bacteria can swim like animals, photosynthesize like plants, and cause decay like fungi. One or another of these microbial geniuses can detect light, produce alcohol, waft hydrogen and fix nitrogen gas,ferment sugar to vinegar, convert sulfate ions or sulfur globules in salt water to hydrogen sulfide gas. They do all this and much more not because they are “pathogens” or in service to clean our human environment but because their survival imperative led to their in-venting every major kind of metabolic transformation on the planet.

The smallest of them have a diameter only a thousand times greater than a hydrogen atom. If there were such a thing as angels that could dance on the head of a pin, bacteria would be they. Ancient bacteria mastered nanotechnology. Already miniaturized, bacteria control specific molecules in ways of which human engineers can only dream. Far more complex than any computer or robot, the common bacterium perceives and swims toward its food.Choosing and approaching their destinations, bacteria propel them-selves by flagella, corkscrew-shaped spinning protein filaments attached to living motors in the membranes of their cells. Complete with rings, tiny bearings, and rotors, they are called “proton mo-tors” and spin at about 15,000 rpm. These proton motors move bacteria in the same way that “electric fan” outboard motors propel boats.

Rapidly reproducing, bacteria properly supplied with food and water double their cells in a half hour or faster. They have been and probably always will be the most important players in maintaining the biosphere. A single photosynthetic blue-green bacterium growing and dividing under ideal conditions could, in theory, produce all the oxygen now in the atmosphere in just a few months.

All other life forms depend on the workings of uncountable living, dying, and metabolizing bacteria. Our relations to the bacteria all around us factor into our health and well-being and that of our soil, food, and pets. As naked and simple as bacterial cells seem, they are continuously busy at the cellular and the planetary level. Varieties of bacteria exist that photosynthesize without ever releasing oxygen, yet they use carbon dioxide and hydrogen to produce all their cell parts. Others incorporate carbon dioxide and hydrogen from the air into body protein, converting their waste into methane gas. Still others turn sulfate to sulfide, or incorporate inert nitrogen into their bodies. Only citizens of the bacterial kingdom are so metabolically gifted. When an animal (like the termite who produces methane) or a plant (like the starved bean who begins to supply itself with nitrogen from its roots) is discovered with such metabolic skills, it is because they have co-opted the bacterial bodies to their expertise. Such borrowing also applies to biotechnology performed by humans in white lab coats. We humans do not “invent” patentable microbes through genetic recombination; rather, we have learned to exploit and manipulate bacteria’s ancient propensity to trade genes.

Bacterial metabolism has created and sustained life on the planet as we know it. For example, the oxygen that we breath first emerged in the atmosphere as pollution, the metabolic waste product of ancient bacteria. For Margulis and Sagan, bacteria are the causes of the major evolutionary shifts and events in the course of the history of life and the true pioneers of biotechnologies such as genetic engineering. Humans are only beginning to catch up with it.

More species of beetle inhabit Earth than any other kind of life, but bacteria are by far the most numerous organisms on Earth. Taken together, bacteria are also the most diverse. They are the oldest, having had the most time to evolve to take full advantage of Earth’s varied habitats, including the living environments of their fellow beings.

By trading genes and acquiring new heritable traits, bacteria expand their genetic capacities-in minutes, or at most hours. A huge planetary gene pool gives rise to temporarily classifiable bacterial”types” or “strains,” which radically and quickly change, keeping up with environmental conditions. Bacteria in the water, soil, and air are like the cells of a growing global being. ‘Whereas your genes are inside a body with a discrete life span, a bacterium takes and gives out its body’s genes in and from the surroundings. Although, of course, like all life, bacteria can be killed by starvation, heat, salt,and desiccation, these microbes do not normally die. As long as the ambience permits, bacteria grow and divide, free of aging. Unlike the mammalian body which matures and dies, a bacterial body has no limits. A disequilibrium structure thrown up by an evolving universe, it is, in principle, immortal. Sequestering order in a disordering universe, the silent bacterial biosphere preceded all plants, animals, fungi, and even the protoctist progenitors of all these forms of larger life. Without the bacterial biosphere no other life would ever have evolved, nor would it live today.
Bacteria are the most tenacious beings known. Some survive extreme environments in the dry Sinai Desert, others in the salts of the Red Sea. Some inhabit Antarctic rocks; others thrive in the Siberian tundra. More bacteria inhabit your mouth right now, even if you’ve just brushed your teeth, than there are people in New York City.

Bacterial tenacity should not be underestimated. This entire planet is bacterial. Human technologies and philosophies are permutations of the bacteria. Eating, infecting, and irreversibly merging with one another, bacteria spun off powerful new prodigies: the protoctists, fungi, plants, and animals—all of which keep alive the metabolism and movement of the bacteria from which they derived.

Questions and things to think about:

Has this account of the evolution of life on the planet made you think about bacteria in a different way? What can we learn from bacteria?

Could the theory of endosymbiosis help change our attitudes towards tiny life forms and other species? Could it inspire a different, more hospitable ethic of living together?

How would you respond to the suggestion that human technology is not the only or even the most groundbreaking technology on the planet?

Do you find that biology could teach us how to think about life in new, powerful and surprising ways?